A Real Blott on the Landscape

I love the Suffolk countryside I live in, but some despair has set in with the ruinous nature and blight caused by solar panels on roofs.

The government set up a policy pinned around the premise that solar energy must be good for us all, and sold as a must have, a “Sid” share bargain not to be missed, with little thought as to how it would work effectively. The tariffs have now been re-set at more sensible levels but the damage has been done and rather like the wave of Pylons that were stealthily erected across the country in the mid twentieth century – solar panels cannot now be easily removed.

Stephen Spender’s poem of the same name, an extract below, has equal resonance for this ghastly solar panel invasion.

“The secret of these hills was stone, and cottages
Of that stone made,
And crumbling roads
That turned on sudden hidden villages.

The result is the menace of these unsightly bulbous installations that interfere with your head space – beautiful views ruined,  quaint villages despoiled and property values affected. 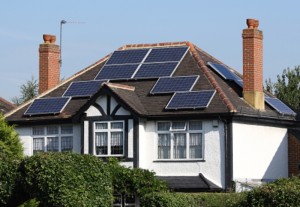 Why did the government not insist on panels that were styled to mesh with the roof or look like roof tiles or coloured the same?  – if you own a characterful country house and your neighbour(s) have modern abodes then unless a certain sanity prevails you stand a real chance of being permanently blighted.

It reminds me of the satellite dish invasion which seemed to be the preserve of a certain type of housing and high rise buildings, but the difference here, is this virus has spread further to overwhelm all – with the attractive glue of cash savings too be made, as energy costs have spiralled forever upward.

The Colne vs the Amazon »« Oh good ale, you are my darlin’